Depending on their outlook, people’s old age will dramatically differ, especially in terms of the richness and fulfillment they will experience. Everything is up to our attitude, how we approach life. Do we look at old age as a descending path to oblivion? Or is it a period in which we can attain our goals and bring our lives to a rewarding, satisfying completion?

As SGI LEADERS, How we interpret the words of members and what we say in response are important. A genuine leader is someone who gives measured thought to such matters. When talking with individuals, ask yourselves: “What are they worried about?”
What are they trying to say?” “What are they thinking?” “What is it they seek?” Try to discern these things in others. Try to know. Try to understand. This is the challenge of leadership. From such compassion arises wisdom.

From the Writings of Nichiren Daishonin
Saturday, March 14, 2015

While I was there, however, you and your husband, the lay priest of Ko, being apprehensive of the eyes of others, brought me food in the middle of the night. Never fearing even punishment from the provincial officials, you are persons who were ready to sacrifice yourselves for me. Thus, though it was a harsh land, when I left, I felt as if the hair that had been shaved from my head were being tugged from behind and as if with each step I took I were being pulled back. The robe of gentleness and forbearance” mentioned in the Lotus Sutra means mercy and broad-mindedness. When you hear that someone is about to stop practicing, you cannot help them if you get emotional or feel contempt for them. That will make them quit for sure. Persevere with him or her in every possible way. Have this determination: “I’ve got to help them to practice.” This attitude will be your “robe of gentleness and forbearance.”

Some non-members may slander our organization. You should realize how unhappy they are and remember that unless you Shakubuku them, they may remain miserable throughout their lives. Resolve to convince these people of Buddhism validity and bring them to a discussion meeting. This attitude is also “donning the rob of gentleness and forbearance.”
(pgs. 43-44) 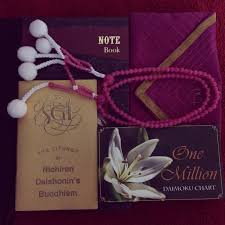